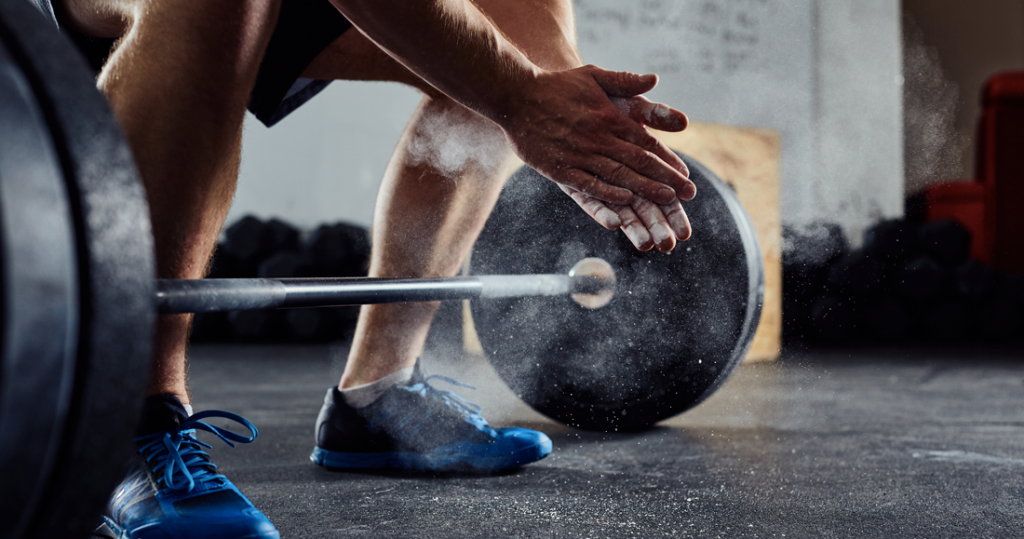 How to choose barbells ? Our selection

A barbell is a barbell right? Wrong. It is your go to piece of equipment for crossfit, and as such, it should be the thing you spend the most time and effort into when choosing the right one. Lifting heavy means lifting quality, and there’s no point in scrimping right off the bat.

Essentially, Barbells are the same in construction, as they perform a specific function, but there are three different types of bar to be noted:

In both of these bars, there are different markings, with the power bar having markings for the hands which are slightly closer in, while the Olympic bar’s markings are slightly outside of that.

Within these three types of bars, there are varying types of sleeve construction. Where the plates are loaded onto the bar is called the sleeve, and it can either be of bushing, or needle bearing variety.
Both Bushing and bearing allow the sleeve to rotate, with the needle bearings probably producing a smoother spin. However, it is pretty common for most dual-marked bars to have bushings in the sleeve, which also makes it more affordable any way.

What we looked for when choosing a bar

The tensile strength of the bar is the breaking point of the bar, and it is measured in PSI. It is different from max static weight, which is a stat that many cheap bars will try and sell you over on. A bar with a good tensile strength immediately indicates quality, and that it will withstand the rigours of many lifting sessions. As an indication, 165K is a good minimum tensile strength, and 190k+ almost means it is indestructible.

The whip is incredibly important for a crossfit bar, and in that vein, a dual-marked bar. It is important to get a balance between whip and rigidness, but a lot of it has to do with personal taste. If you are more into heavy lifting and slow movement, then a bar that leans towards the rigid side will be fore you.

There are a number of different finishes a bar can have, and 90% of it is all about athletics. Some bars are shiny, others matt, some are black, while other muted in metallic tones. Again this is personal preference more than anything

The knurling is the grip that is machine cut into the bar, it is where your hands go and has a lot to do with the feel and comfort of the bar. It is important for the knurling to provide plenty grip, take chalk well, but not be uncomfortable to hold.

Durability refers to overall quality really, because in a bar, you want it to last, and for it to last the only way is for it to be of exceptional quality. A durable bar will be one made of good materials, and constructed well, and precisely.

The Best Barbells for Crossfitters 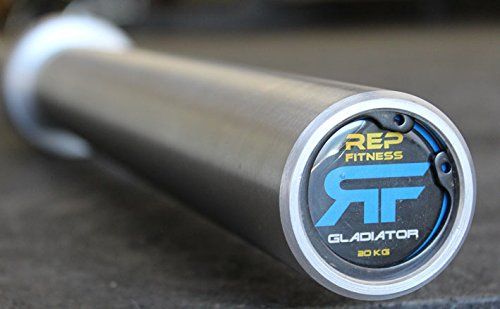 When it comes to a solid, and dependable, bearing bar, there is a small market – especially for crossfitters. However, the Gladiator feels like one of the most solid bars out there, and for the price it comes at, it’s a solid investment.

At 230K tensile strength there is no worries of this bar breaking on you, and that little titbit of information starts to explain its firm feel. The bar is also 28 mm, and has some excellent whip for a bar made of such high tensile strength material.

The gladiator is the ideal garage gym bar, or even commercial box bar because it requires such little maintenance thanks to the chrome finish, it is an expensive rust resistant coating that is an essential if the bar is going to be heavily worked.

A nicely balanced medium knurl gives you the grip for the heavy lifts, but there is no danger of unnecessary tearing thank to a shark-tooth design. Perfect for high rep, crossfit work. 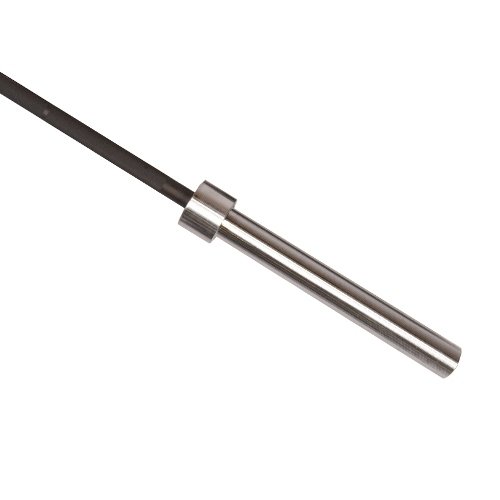 In terms of entry level bars, the CAP 86B does a job, but it really should only be considered for beginners in a garage gym. In saying that, it is outstanding in its grade and the top of the list for a basic bar.

Looking at the bar on face value, it looks to be multi purpose, but in actuality, it would be better suited for power lifting. The tensile strength is a little down, at 130K and as such wouldn’t take to much high rep-heavy weight abuse.

On top of that, it is slightly thicker than a multipurpose bar at 28.5 mm and that has a lot to do with its inherent lack of whip.

What this bar does make up for in it’s reasonable assembly is the knurling which is really comfortable, if not slightly abrasive. Better for Olympic lifting which it is obviously geared towards.

Again, its olympic lifting pedigree shines through when you feel the rotation of the sleeve, which is a little sluggish and slow.

As a newbie’s bar, it is worth the money, but as your lifts become more Olympic and you need that whip, and spin, you will have to fork out for a better bar. 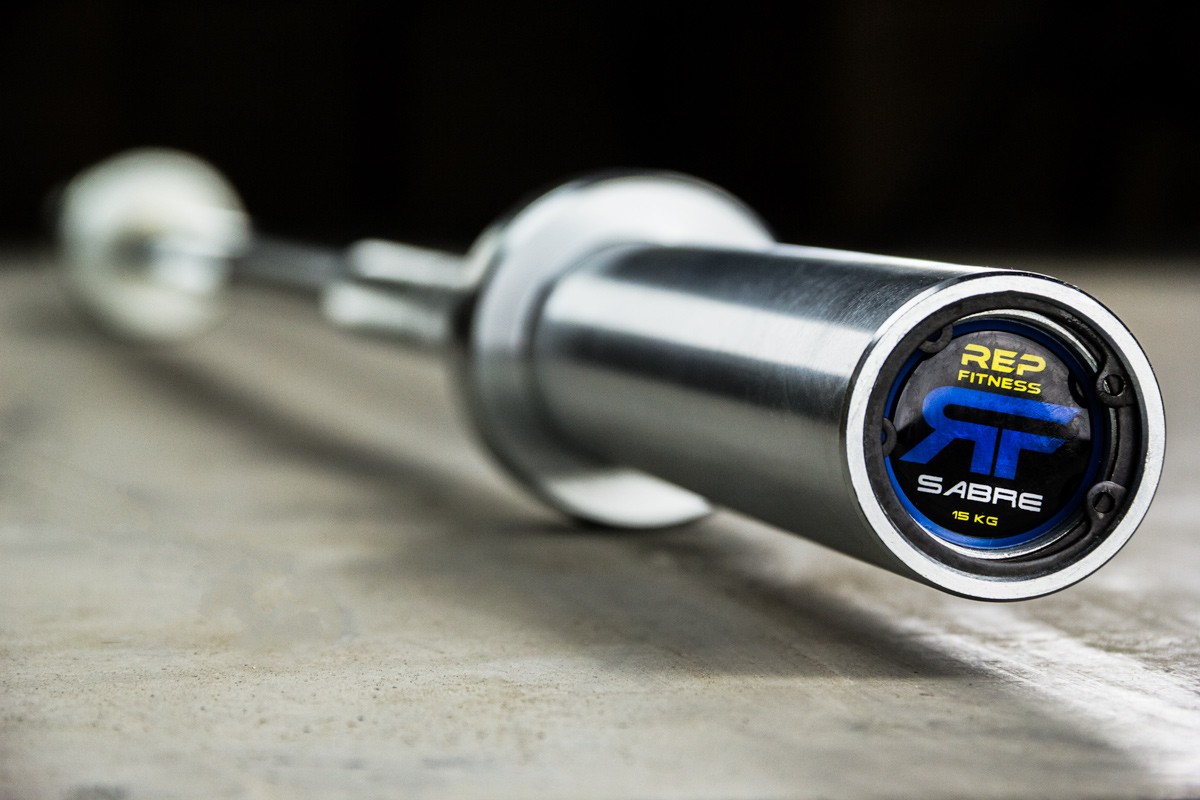 When it comes to ladies bar’s there is a slight difference, mostly in weight and diameter, but if you are looking for a good ladies bar, that is suitable for beginners, the Sabre is the way to go. There’s a 20 kg Sabre, which is a good starting point for men.

Similar in many respects to its big brother the Gladiator, the Sabre is lighter and therefore has less tensile strength at 150k, but this is still ideal for crossfit.

Unfortunately, the coating is zinc, and while it is still rust resistant, this one would start to show signs of wear and tear on the face value before a chrome covered bar.

A good medium knurl is present in both the mens and womens bar, but there is only a center knurl on the men’s. This is for more powerlifting as the men’s bar is seen as more multipurpose and functional.

Rep is a reputable brand, and this is their reasonable bar that has the quality you can trust, but is far kinder to your wallet. There is no doubting that in either mens or womens bars, this is a beginner one- even the whip is a little rigid indicating less quality in terms of its tensile strength – but it is a bar that won’t let you down. 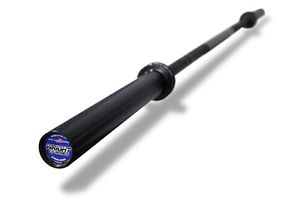 Immediately noticeable on this bar is the finish. Blue and black, the Wright bar is a good looking piece of equipment, but more than that, it is also a well made piece of equipment. With its 201k tensile strength and ample whip, you can feel confident in getting the most out of this bar if you are a proficient athlete.

Very durable, as a bar alone, but the finish does lend itself to scuffing and discolouring. However, once you get over the aesthetics, you can start to appreciate the build. With Bronze bushings, the bar has good spin in its sleeve which makes it ideal for crossfit, and the fact that it is so well made means it will last with multiple reps over many years.

Surprisingly, quite a light knurl on this bar, but as it give the impression of a well-built speed machine, you’d want to be able to get this thing up in the air quickly and easily.

For the middle of the road crossfitter, this bar will easily support the heaviest weight you can lift, but it will also give you a bit of a boost with it’s build quality and whip. 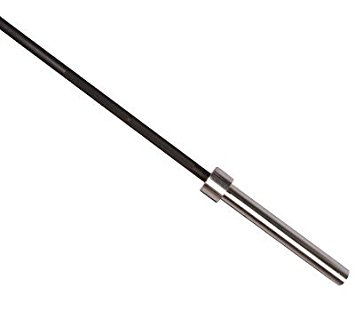 While there are a number of bars that are built for crossfit alone, those can be on the wrong end of the price spectrum for the everyday athlete, luckily, there are bars that are built for multipurpose lifting, but with crossfit in mind. The CFF Wod bar is exactly that car. At 165k tensile strength, it is everything you need, and with the balance it has for a crossfit bar, its everything you want.

At 28.5 mm and with medium knurling, it’s exactly where it should be for a functional and versatile bar, but more than that, it is a good looking bar with the corrosion inhibiting black oxide finish really making the chrome sleeves pop.

Bars from Rogue will run you up a lot more money than this bar, yet, there is very little to tell from the actual experience of using this CFF bar.